Cavs – Celtics Series is Over. Is Lebron James the Greatest of All Time? 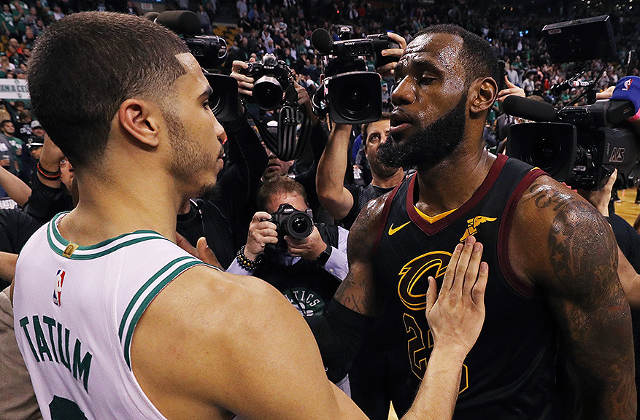 Yesterday, Game 7 between the Celtics and the Cavs took place. The Celtics have started the game strong with Jayson Tatum and Al Horford leading the way. Lebron James did everything he could in the first half to push his team but horrible 3pt percentages have resulted 0 assists for him in the first quarter and a minus 10 on the scoreboard. With Kevin Love out with concussion, someone had to step up for the Cavs. Lebron might be the greatest of all time, but basketball is a team sport and as much as he carried his team, the win was a team effort. Jeff Green has stepped up his game and played fearlessly attacking the rim and actually scoring his open 3pt attempts. A late Cavs surge ended the half with a 4 point deficit.

The second half was a different story, it started horribly when no team was able to score. Terry Rozier was especially awful, hitting 0/10 on his three pointer. But, Lebron emphasized getting his teammates involved. JR Swish, Jeff Green and even Kyle Korver had amazing bursts to finally lead the way. When the 3rd quarter ended with a 3 point advantage, the Boston crowed was silent and for a good reason.

The Celtics probably have one of the best coaches in the league, their roster had an amazing season with Kyrie and Hayward down, but in the last quarter they have played confusing basketball. The Cavs finally played good defense on Horford and Jayson Tatum has carried the load and finished with 24 points. But, Rozier, Jaylen Brown and even Baynes weren’t shooting well and the basketball has refused to go in. In the crunch time, Lebron James did what he was supposed to do, attack the rim with force. he went plenty to the line and scored a few tough layups. Even a Tatum poster hasn’t rattled his mind and he was determined to win his 6 straight game 7.

The Cavs had a horrible season, but Lebron’s playoff run is truly extraordinary. After 15 seasons in the league, some superstar’s bodies have betrayed them. T-Mac, Vince Carter, Allen Iverson, Dwyane Wade and more have declined even before their 15th season. But. Lebron is probably playing his best basketball yet. He doesn’t have Kyrie to share the load, he plays more than 45 minutes a game, he leads his team in every statistical category and he makes the right place down the stretch. Even though he carries the ball most of the time, he understands that he has to get his teammates involved and that without them the Cavs can’t win.

I would still bet against Lebron on the NBA Finals. Either the Rockets and Warriors are more talented than the Celtics and will cause plenty of miss matches. The Cavs D can’t handle them, but for a short while we are living the Lebron James World. the last time Lebron James hasn’t advanced to the NBA finals it was the Kobe Bryant led Lakers against the original big 3 from Boston. Kobe, Pierce, KG and Ray Allen, were in their prime. Andrew Bynum was the 2nd best center in the league. Jayson Tatum was only 11 years old. None of the recent NBA legends have such an amazing consistent dominance over the league. Kobe, MJ, Bird, Magic – no one had 8 straight Finals appearances.

Lebron only has 3 championships, compared to Kobe’s 5, MJ’s 6 and even Shaq’s 4. But, Lebron is the only player ever to lead a finals series in all 5 major categories (points, rebounds, blocks, steals and assists). his dominance is incomparable. Even when Lebron loses, his teammates get the blame for not stepping up. A lot has happened since 2011 when the Mavs and Heat played each other, Lebron didn’t take the game over, he gave the ball to Wade. But his progression and experience have made him one of the best clutch players of all time, even in season ending scenarios like we have witnessed yesterday.

I think that Lebron James is the greatest player of all time. His mental game is as strong as anyone’s else. people might say that because he plays in the leastern conference things were easier for him, but I think that it’s a bad argument. Maybe 3 finals appearances could be a fluke, but 8? that’s absolutely crazy. MJ was the greatest scorer of all time, he was a tremendous defender as well but was he the best player in every category in every game? probably not. It’s very hard to compare the two, basketball has changed a lot since MJ hanged his shoes and players today are asked for a lot more than just score, but Lebron’s dominance over every aspect of the game makes him my pick for the greatest player of all time.