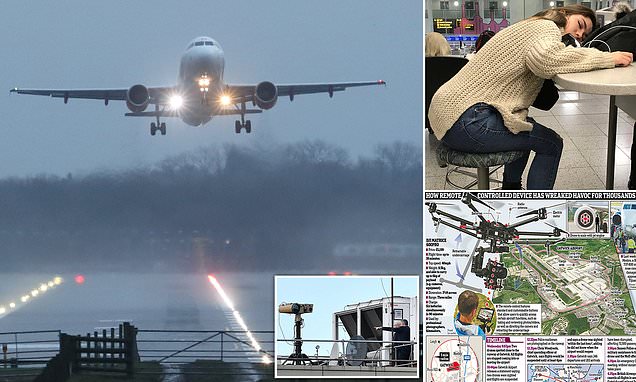 Gatwick Airport has closed its runway again tonight after another suspected sighting of a drone, bringing fresh chaos to passengers just days before Christmas.

Flights have been suspended again as the drone pilot responsible for the havoc remained at large almost 48 hours after the drone was first spotted over the airfield.

One flight from Morocco appeared to be just moments away from landing when it was forced to divert 1,000 feet above the ground tonight while other passengers were sitting ready for take-off when pilots told them of another sighting.

Flight trackers suggested planes were being diverted to Stansted, Luton and Heathrow after the last plane landed at Gatwick at 4.59pm, while trains to Gatwick also faced delays.

The latest appearance has defied the police and Army who hoped their jamming devices had knocked the drone out of the sky last night.

It also comes in spite of police claims they were closing in on the pilots who used ‘multiple’ drones to shut down Gatwick’s runway and even taunted officers by zooming over their heads while flashing lights at them.

Detectives have identified ‘persons of interest’ but have failed to make any arrests 48 hours after the chaos began.

As the crisis entered a third day:

Flights resumed this morning after all 760 scheduled journeys were cancelled on Thursday, wrecking festive plans for 110,000 people left stranded at the airport.

Police, the Army and MI5 spies have been combing the Sussex countryside with the prime suspects believed to be either a ‘lone wolf eco warrior’ or a larger group of climate change activists.