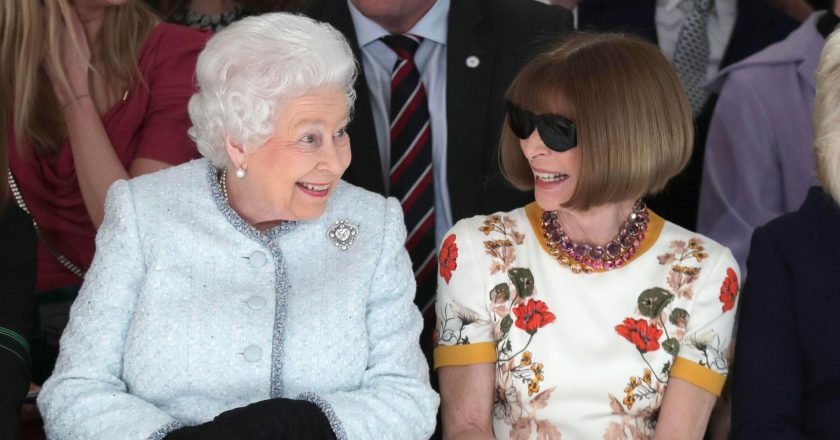 The Queen, the actual monarch of the United Kingdom, made an appearance at London Fashion Week for the first time in history. This was a genuine surprise to everyone as the 91-year-old Queen Elizabeth II has never done this before and she has ruled the UK for well over a decade.

However, the more important news here is that she was actually enjoying herself. Naturally, she was sitting in the front row during Richard Quinn’s show, the esteemed British designer. She was sitting right next to Anna Wintour, the Vogue Editor-in-Chief. They were chatting and the Queen smiled from time to time. On the other side of the Queen was Caroline Rush, British Fashion Council Chief Executive.

This whole occurrence was a definite surprise to everyone, but probably not to Richard Quinn. The Queen was there on business mostly, to present him with an inaugural Queen Elizabeth II Award for British Design. That being the case, it was still a huge deal for the Queen to visit London Fashion Week, an event she never graced with her presence before.

When she entered the event, most of the people were struck with amazement. Barely anyone could believe what was happening but at least everyone managed to settle down, at least just enough to take their phones out and get some pictures of the Queen.

Even though she is the monarch, everyone was very glad to see her for another reason as well. As you probably already know, Queen Elizabeth II is also a fashion icon to many, and her outfits have been closely followed ever since she became the Queen of the United Kingdom and the rest of the Commonwealth.

Now even though the main designer’s outfits on the stage were bold, as usual, the Queen was wearing her more regular and subtle attire, as you can see in the picture.