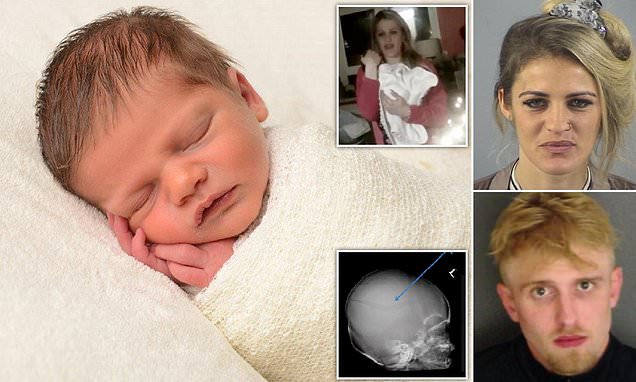 A mother and her ex-boyfriend have been today jailed for 10 years over the ‘brutal’ death of her 24-day-old baby who suffered a fractured skull and brain haemorrhage.

Roxanne Davis, 30, and her 24-year-old former boyfriend Samuel Davies were each jailed for ten years for causing the death of her son Stanley Davis.

Stanley died in hospital on March 28, 2017 after suffering ‘horrific injuries’ including an 8inch fracture to his skull, which killed him.

He had also been admitted to Portsmouth’s Queen Alexandra Hospital for 32 rib fractures and nine more to his arms and legs on three other occasions.

Davis and Davies, who both smoked cannabis and took cocaine, tried to cover up his injuries, which could have been caused by shaking him or throwing across the room.

Sentencing the pair, the judge said that the baby ‘was in pain for much of his short life’ and suffered a ‘brutal’ attack in which he was violently shaken.

The judge said Davis was more upset about herself than her son, who she ‘treated as little more than a fashion accessory.’
Police officers were called to the couple’s flat just 17 days before Stanley died – when he was only one-week old – after neighbours reported them shouting.

A court heard today a bruise behind Stanley’s right ear was misdiagnosed as a birth mark by a paediatrician, when it was in fact the first sign of serious injury.

When it began to fade just days after it was spotted, it was looked at again by midwives who realised it was in fact a bruise.

Despite lengthy investigations, police have never been able to establish which of the pair inflicted the fatal injuries.

But when they were convicted, Davis turned to her ‘volatile’ former partner in the dock and told him: ‘You murdered my baby.’

Davis sobbed during the hearing and as she was taken down to the cells, she shouted out: ‘He’s a murderer.’

The court heard that the former couple, who are not married, had a fractious relationship, with the police being called to the property on March 11 by neighbours who reported shouting coming from the one-bedroom flat they shared in Gosport.