Peculiar Similarities Between Characters from Star Wars and Game of Thrones 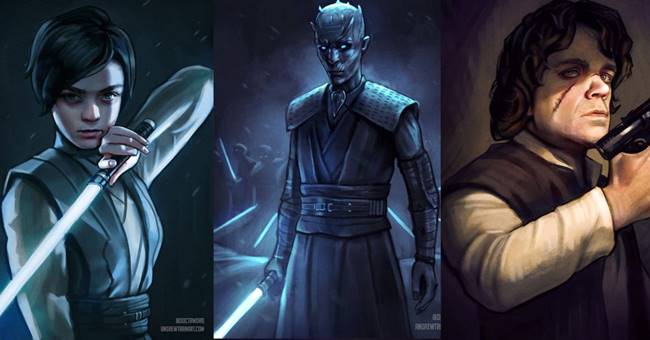 It’s always interesting when you find similarities between characters in two very distinct pop culture phenomenon. That’s the case in this situation. Also, the popular fantasy drama and a space opera have basically nothing in common. Yet these similarities are more than just curious. George R. R. Martin must be a huge fan of Star Wars as these can’t be coincidences.

One of the two is a self-sufficient and independent young woman. She travels halfway across the world to join a secret order. One has a mysterious mentor who is also a jerk. She learns a lot thanks to having some natural talents and affinities towards fighting. Then she leaves her training in order to help her family and friends. Oh wait, that’s just the story of both of these characters!

They might not have much in common personality-wise, but the rest is just weird. Let’s see, evil fathers, blond hairs, noble heroes, only one hand, and of course, both had the hots for their sisters. These are more than enough to make it peculiar.

These two don’t have that much in common but it’s still a bit strange. Both of them are cowards and don’t do much to help in important battles. Yet they are both always there and the main characters love them. If they don’t know how to fight, at least they throw some trivia at us.

OK, now this is just obvious. Overall good guys with some bad attitudes yet with hearts of gold? Smugglers? They unwillingly get involved in rebellions? Both have some weaknesses for princesses? I mean, common, this is just practically the same.

Now, this is just the case of some lazy writing. These two basically have the same story. Both are young women with noble roots who fall in love with a wrong person, get married in secret, and then die in childbirth. In addition to all of that, the mystery of the origin of their children becomes an important part of the overall story.

Naturally, there are several minor similarities between a couple of more characters. However, once you start looking for those, you realize that for some you started grasping at straws. That’s why I’ll leave it at these out of fear of adding some untrue comparisons.