The Queen and Prince Charles ‘Masterminded’ Kate and Meghan ‘Truce’ 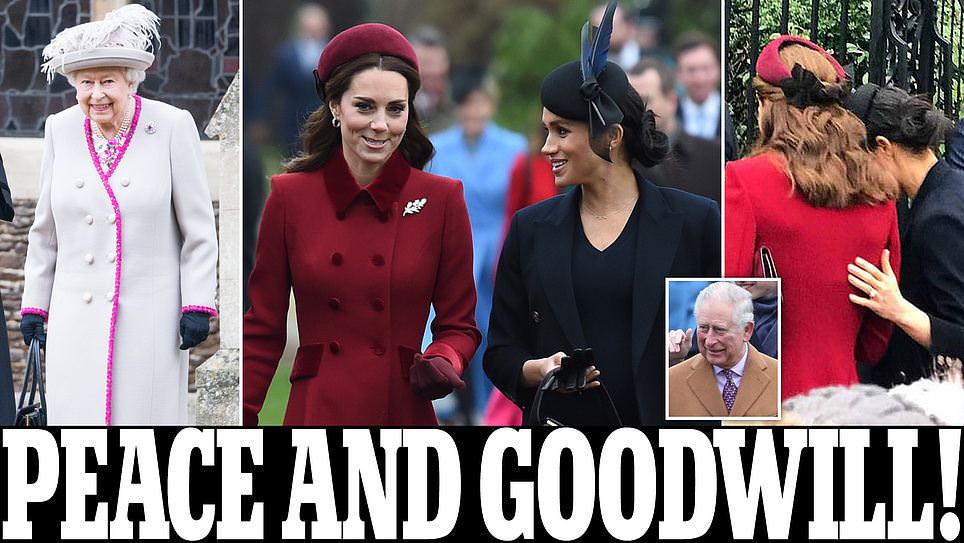 Kate and Meghan are said to have been ordered by the Queen to put on a show of unity together at the Christmas Day church service in Sandringham.

Her Royal Highness and Prince Charles allegedly made it clear that any rift between the two duchesses must be kept out of the public eye as they arrived together at the St Mary Magdalene Church.

The two appeared to take the advice on board as they were seen laughing and joking while photographers captured the pair walking towards the church.
A source told The Sun: ‘The Queen and Charles have allowed the situation to play out without overtly interfering — but they both made it clear that Christmas was for the whole family to really come together.

‘That meant the two couples walking into church together as the Fab Four just like they had last year. Yes, it was awkward and uncomfortable given what’s gone on over the past 12 months.

‘But the alternative of even more negativity on Christmas Day wasn’t worth thinking about.’

The Queen allegedly told Kate and pregnant Meghan to put their differences aside by the time they sat down to watch her speech along with the rest of the nation at 3pm on BBC.

It comes as there have been rumours swirling for months of a rift between Meghan and other royals.

Rumours of the feud surfaced when the Duke and Duchess of Sussex announced they were moving out of Kensington Palace to live in Frogmore House in Windsor.

There were also reports of a falling out between Meghan and Kate during ­Princess Charlotte’s bridesmaid dress fitting before the royal wedding earlier this year.

It was also claimed that Prince William told the Queen that he did not think Meghan was a suitable wife for his brother.

It was hinted earlier this month that the Cambridge’s would spend the day with the Middleton family in Berkshire, and Harry and Meghan would spend it with the Queen.

However Kensington Palace later confirmed they would be celebrating the day together in what was a show of solidarity between the royals.

The Royals’ were led by Prince Charles to the church at the Norfolk estate, following by his sons and their wives and the rest of the family.