The Real Life Events and People That Inspired Game of Thrones 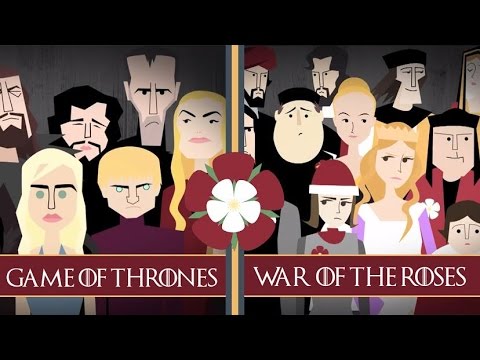 Game of Thrones may be a fantasy show/books, but it still takes inspiration from real life events and people.

King Robert Baratheon from Game of Thrones is very similar to Edward IV, King of England. Baratheon overthrew the Mad King Aerys and Edward IV did the same to the mentally incapacitated King Henry VI during the Wars of the Roses.

The War of Roses is also the most important inspiration for Game of Thrones. The war was fought between the noble English houses of York and Lancaster. The War of the Five Kings from the show was mainly started by two noble houses – The Starks and the Lannisters. Even the names are quite similar. Furthermore, both wars brought devastation to their respective kingdoms.

Tywin Lannister is one of the richest men in the Seven Kingdoms and his support for Robert Baratheon proved to be the decisive factor in the war to overthrow King Aerys. Richard Neville, the Earl of Warwick was one of the richest men in Medieval England and his support of Edward IV proved instrumental in defeating the mentally ill King Henry IV. These two are not the same at all.

The Night’s Watch takes a lot of inspirations from the Medieval Christian knightly orders, like the Knights Templar. Just think about it, both are military orders that take vows to defend certain things. Both take vows of chastity and are completely obedient to their masters. The parallels are clear.

Stannis Baratheon is quite similar to the real-life Richard III. Both of them thought that their nephews are illegitimate. They both tried to take the throne. Edward succeeded, but Stannis has died in the show. BUT, he is still alive in the books so… maybe he will win?!

Brienne of Tarth is basically the same person in the books and the show, and she was definitely inspired by Joan of Arc. The famous French revolutionary from the Middle Ages is quite similar to Brienne. Both are great warriors with firm convictions in doing what’s right. Furthermore, the Maid also liked to dress in men’s clothes like Brienne, which is probably both of their defining characteristics.

There are a lot of more historical events and people that inspired the Song of Ice and Fire so I’ll probably do another article soon!