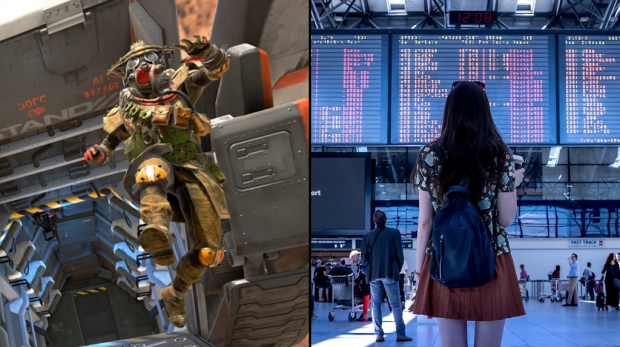 A young man who was waiting to travel at Portland International Airport did the unthinkable by plugging his PS4 to the airport monitor and started playing. Just like mist travelers who get bored of airport hassle, the man chose to enjoy playing Apex Legends on the airport information monitor.

Traveler plugs his PS4 unto an airport monitor

According to Portland Airport spokesperson Kama Simonds the man unpacked his PS4 and plugged it into the airport monitor that showed the map of the airport. This incident was heard on the emergency scanner as the “hijacking” of the monitor. Usually, there are several monitors in the airport that display different kinds of information.

There are those where travelers check flight information, and there is a bottom bank of screens where there is a lot of airport information like where restrooms, restaurants, or shops are. The traveler had plugged his PS4 to the monitor that indicates where to find essentials in the airport.

The spokesperson said that this was unfortunate, and it was something they didn’t wish had happened. This is because the monitors are important in displaying information to travelers who are waiting to travel.

Gamer wanted to finish the first round of the game

Simonds said that operations supervisors approached the young man and politely asked the man to cease using the airport monitors. When asked to unplug his PlayStation, the man, however, asked politely if he could finish the first round first. However, the security informed him that it was against port regulations and asked him to turn it off and unplug it because passengers were using the same monitor to receive information.

Interestingly it seems this was just a bored passenger and wanted to enjoy playing his game because he didn’t cause a scene when asked to unplug the PlayStation. The gamer politely heeded the security’s call and unplugged the system without any incident.

This was, however, a change for airport officials to remind passengers on the dos and don’ts when waiting at the airport to travel.