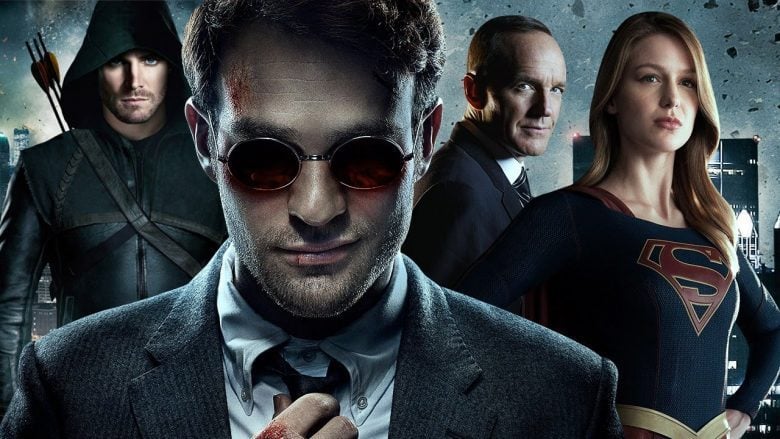 I’m not a huge DC fan (not counting the comics, those are great) and I am thus very glad that Marvel has a far better movie universe. However, when it comes to the TV shows, the situation is quite different.

Both companies have a couple of quality shows on the air at the moment, with DC having a head start as their shows started airing a few years earlier and were already respected programs with a huge fanbase when Marvel joined. Marvel got in the game fairly recently but managed to make a big bang with their hit Netflix shows. Two or three years later, both DC and Marvel are powerhouses on the small screens.

When it comes to their shows, so many of them are very good, or they were good. The first one is Arrow, the oldest DC show, that started the very trend (the entire DC universe on TV is called Arrowerse), still very good yet its quality and popularity dropped a bit recently. This is not surprising as it is, in fact, in its 6th season. Every show basically falls in quality after that many seasons, it has become a natural process with shows. True fans and many other regular viewers still really enjoy it.

Besides the oldest one, there’s the Flash, DC’s number two series, still going strong in its fourth season. The show has a bit of a different vibe which is actually quite unique and interesting, something that plenty of sci-fi and superhero fans can appreciate. In addition to those, DC has Supergirl that’s not as good honestly, but still quite popular, and existing in an alternate universe while still connected in a way to the main shows. It’s confusing, but DC loves going all the way into the weird and different.

The last one in the universe would be the Legends of Tomorrow, a fairly good show with some decent ratings, worth a watch if you’re a fan of DC. Otherwise, you can skip it, as it’s not as good as the rest.

First of all, I have to mention Agent Carter, my personal favorite, that got canceled for some reason. Bring it back! The show was amazing and Agent Carter herself one of the greatest characters Marvel ever put on the small screen.

The longest-running Marvel show would be Agents of S.H.I.E.L.D. which is a fairly good show, but definitely not Marvel’s best. At least it’s not as terrible as the latest Inhumans, definitely the worst one in both universes.

The main Marvel shows are currently on Netflix, and this is where Marvel’s light shines bright, maybe even brighter then DC’s best shows (I’m probably subjective here). Here we have Daredevil, the ultimate best Marvel has to offer and the equally amazing Jessica Jones. These two were the first and still are the best, but we are waiting for both shows to finally start airing again as they were taking a break while Marvel’s newer and not so good shows were airing: Luke Cage, Iron Fist, and the Defenders – which got all these 4 characters together and brought us a show with too many flaws and not worth the watch.

The last but not least, there’s the Punisher, the latest installment which swooped us off our feet and finally stopped the decline Marvel was showing recently.

As you can see, both DC and Marvel have their good and their bad moments and it’s very hard to make an objective opinion on whose shows are better. It’s up to each of us, I guess.